Ringling Bros. Barnum & Bailey Circus has announced that the circus will close in May, citing declining ticket sales; this follows an earlier announcement that there had been a ‘mood shift’ among their consumers about the use of animals in circuses.

This is welcome news. For over twenty years, ADI has published evidence exposing the cramped, barren conditions in which these animals live, with long periods of time tied up and chained with no freedom of movement along with a brutal training culture. Our years of investigations, detailed reports on the scientific evidence and economic arguments and exposing behind-the-scenes brutality has made a difference. This evidence has been a catalyst for action. And public opinion made this happen.

Our thanks to everyone who has given out a leaflet, carried a placard, written a letter, testified, educated friends, family and colleagues, stood outside a circus and informed audiences. You made a difference. 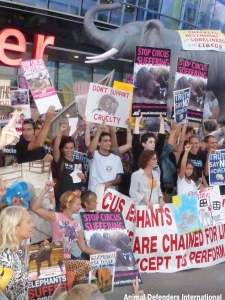 Today’s audiences have many entertainment choices and do not want to see shows where animals are forced to perform and live in, effectively, barren boxes on wheels. Hence the growing popularity of human-only performance shows.

Ringling Bros. made the wrong call by not moving with the times. Although they dropped their elephant acts last year, they continued to misunderstand their audience. The trend away from animal acts includes other animals such as lions and tigers. Circus shows without animals are not only surviving, they are increasingly popular.

This is a business decision, the animals remain the property of Ringling Bros., and they will decide their fate. ADI strongly urges the Feld family to reflect public opinion and allow their ex-circus animals to be taken to good sanctuaries. Let them live out their lives with no call on them to be an exhibit or perform in any way. Let them enjoy the freedom they lost when their forebears were captured.

When the use of animals is ended through national legislation and it becomes illegal for touring shows to have the animals, ADI is happy to assist officials with finding homes and we have relocated approaching 200 animals around the world. The animal protection charities in the US have the resources to manage this task, should Congress act.

Worldwide, 34 countries have looked at the evidence and taken national action to end performing animal shows for reasons of both animal welfare and public safety, with others considering action.

Keeping large, stressed animals in lightweight, mobile facilities is clearly unsafe. The nature of constantly-moving shows is problematic for officials. USDA Inspector General reports describe the difficulties with follow-through on findings of inspections and regulatory enforcement for shows which are constantly on the move.

These concerns have prompted action in the US Congress and Representatives Ryan Costello (R-PA) and Raul Grijalva (D-AZ) plan to introduce the Traveling Exotic Animal Public Safety Protection Act (TEAPSPA), to end the use of animals in these unsafe mobile shows.

ADI will be encouraging the public to support this proportionate and reasonable approach to dealing with such animal welfare and public safety risks. Already, 66 local jurisdictions across 27 states in the US have barred animal circuses from towns and cities, while several states are considering similar legislation. The will is there.

This is an issue whose time has come.J.