BACK THE BAN – SUPPORT TEAPA! 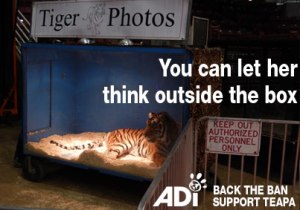 A great day – today, on Capitol Hill, Rep. Jim Moran (D-VA) introduced HR 4525, the Traveling Exotic Animal Protection Act (TEAPA), into the 113th Congress of the United States. The Bill will end the use of wild and exotic animals in traveling circuses in the US.

It’s time to BACK THE BAN and SUPPORT TEAPA! See: See

The US has joined an honourable group: thirty countries around the world are either discussing a wild animal ban – such as the UK, Brazil and Mexico – or have already passed a ban. Twenty-seven countries including Austria, Belgium, Bolivia, Colombia, Costa Rica, El Salvador, Greece, India, Panama and Singapore have ended either wild animal, or all animal circuses. The full list is here: here

This US bill, like the British Government’s Wild Animal Circus Bill, is not just about the brutality and cruelty we have exposed. Animal suffering in traveling circuses is directly related to the circumstances; many hours tied up or chained in barren living spaces, unable to move about and the need for animal accommodation to be small, mobile and collapsible, in order to fit on a trailer or truck.

Over the past 23 years, all species of circus animals ADI has studied have displayed the disturbed, stereotypic behaviors that indicate an animal is not coping with its environment and is therefore suffering.

During a recent study, we were able to show that the wild animal performances were just 15 minutes of a two-hour circus show. This is easy to change – circuses vary their shows every year – removing the wild animals is not a huge step.

Certainly, the public enjoys wider choices for entertainment than previously and increased awareness of the needs, intelligence and emotions of other species makes the animal shows less popular than the hugely successful non-animal circus shows like Cirque du Soleil.

Causing animals pain and suffering just for entertainment is unacceptable in a modern, civilized society and thankfully many countries are waking up to this important issue.